When Ph leaves his mechanical 16mm film camera with N in Beirut in early 2019, he has been coming to this city occasionally for several years to work on a film project that has not materialised to this day. Research for the project gradually turned into an end in itself. Ph brought the camera because he thought that making pictures, even a few and without a production budget, was a haptic act that may release the film’s coming into being. Materialisation leading to more materialisation. At this point, however, Ph has to go back to Berlin to take care of other things.

N and Ph met two years earlier, when Ph was showing some of his films in Beirut. N also makes films but has never operated such a camera. Ph shows N how to use it. They spend an afternoon exposing a test roll. Ph leaves some unexposed rolls with N when he hands the camera over to her.

Ph does not return for more than two-and-a-half years. During this time, many things happen in Lebanon. Banks freeze their customers’ US Dollar savings in an attempt to control a lack of incoming foreign currency and an impending national liquidity crisis. The Lebanese Lira, which was pegged at a fixed rate against the Dollar for more than 20 years, devaluates, hyperinflation ensues. The already dysfunctional electricity supply deteriorates further due to fuel shortages. A popular protest movement against Lebanon’s encrusted political system that forms in October 2019 falters with the implementation of measures against Covid 19. Political, economic and health crises conflate. The threat inherent in a system that avoids taking responsibility for the common good in favour of personal gain becomes real with the explosion of a large amount of ammonium nitrate stored in Beirut’s port in August 2020. The explosion, the protests, and the effects of multiple crises leave their traces on the city. In this period, N begins to shoot a film using Ph’s camera.

When Ph asks N in summer 2021 if she could imagine exposing three expired rolls of film based on his written instructions, the irony of proposing to film with a spring-driven camera in a place where power supply constantly fails does not escape him. N agrees. Ph sends the rolls before writing the instructions, not knowing exactly what he would like to have filmed and not sure to what extent filming will be possible in the current situation. Ph decides to wait until the end of the hot season and to try to not presume what would or wouldn’t be feasible for N when writing the instructions. Her pictures would show the discrepancy between ideal and actual possibility. It takes N a while to respond after she receives the instructions. When she does, she declines.

N considers the instructions to be too demanding. Besides, they are an expression of Ph’s personal access to and history with the city, which N finds interesting but cannot relate to, having experienced the recent developments in Lebanon herself. For N, Ph’s perspective belongs to a previous time. The Beirut of the present, which in her words is becoming a worse and worse version of itself, slowly but surely decaying, is something that N feels unable to turn into pictures. She proposes that Ph come and film the locations he had indicated in the instructions himself, in order to physically experience what it is like to be in Beirut now.

N also suggests that her refusal to film on Ph‘s behalf should be considered as a new departure; an evolvement of what Ph had originally proposed that would take into account her experiences in the city and her feelings towards it. Finally, N asks Ph to reconsider his decision to use expired film stock. The risk that the exposure and development of this stock might not yield any images creates anxiety: Would this add another layer of disappearance? Wouldn’t Beirut need fixation rather than dissolution?

To Ph, a city and its picture, as well as their respective erasures, are different things. But they are also things which are admittedly difficult to detach from experience, memory, and imagination. Ph understands that he will not be able to fully comprehend N’s experiences or reflect them in his work. Nor does he have any interest in actualising his memories through pictures made by himself. Using the camera to materialise precisely the gap between N and Ph, makes even more sense to Ph now.

Ph asks N if there was anything she would film, unrelated to his instructions. Simultaneously, he suggests that the constellation could be extended, that someone else could film in place of N. Ph thinks that O could be this someone. N replies that for the time being she feels unable to film anything, and that Ph should go ahead and ask O. To Ph, inviting O appears to be a possibility of taking up N’s cue that her refusal could be the starting point of another version of his proposal.

N and O know each other, but Ph does not know exactly from where and how well. At this point, O has been living in Beirut for about seven years. Ph had met O three years before his move to Lebanon. Both were making films at the time. During Ph’s visits to Beirut, O and Ph had met occasionally and briefly. O has founded a family in Beirut and is not planning to leave. His history with Beirut is short compared to N’s. Could this be the mediating position between N and Ph, attached but with short roots?

O and Ph talk on the phone. The connection is bad. Ph isn’t sure if O understands his proposal. Ph writes afterwards that he will come to Beirut soon to further discuss this matter. Ph travels to Beirut. N returns the camera to Ph. After reading what Ph had initially sent to N and discussing some of the details, O agrees to taking pictures with the camera on behalf of Ph and in lieu of N. Ph instructs O in the operation of the camera and hands it over to him. All three meet for dinner before Ph leaves the city. They do not talk about what Ph has been calling an extension of the constellation.

I left my film camera with you in Beirut, thinking that I would be back in the next few months. I haven’t returned – first of all, because of the political situation in Lebanon, secondly, because of my own work related circumstances, and finally, because of the pandemic –, so the camera is still with you. After some time, you started to shoot a film with it, for which I buy raw stock in Berlin that a friend takes to Beirut. Upon her return, she brings the rolls you have exposed. I take the rolls to the lab for processing and digitisation. I see the pictures that you have made before you do. I compress and upload them for you, keeping the analogue and digital source materials in Berlin. This private micro-economy originating in a mechanical piece of equipment makes me feel strangely connected to where you are, to what you see or what you intend to make visible. It has established a material relation that short-circuits with my physical absence from a place that I have only seen through your eyes for quite some time. I want to reverse the input direction of this circuit, at least momentarily, and ask you to make pictures with my camera on my behalf. For this, I have sent you three 30-meter rolls of 16mm film.

The instructions below define locations in and around Beirut that are part of my personal memory of the city. Many of them are related to my research on the connection between cinema, motorised transport, international cooperation, and nationalist endeavours, and how they have shaped the city. Questions regarding access to public space, to collective imagination and memory, or to basic resources that emerge from this historical research are also questions of today. They shape the ways of looking at and being in the city for locals and visitors alike.

I suppose that some of the locations I specify will have changed since I last saw them. A few of the shots I propose are not locations in the strict sense but rather images that I have kept in my memory, for which you will have to find actual locations. For the shot order of the rolls below, I tried to think of feasible itineraries. They might not be, given that my mental map of the city is somewhat distorted, and that fuel is rare in Lebanon at the moment. If you can’t access them, I trust that you will find other places and views that will correspond with or contradict to what I have written. You are free to digress.

Each full wind of the Bolex camera’s spring gives you rolling time of 25–30 seconds. A 30-meter roll of film roughly equals six full winds. One wind can be one long shot, or several short ones. It is up to you how you break down this set duration. Should you still have some film left at the end of one roll, expose it with the camera directed either at the ground or at the sky. After finishing one roll of film, I would like you to write shot descriptions from memory, without revisiting what I had originally written. My prescription and your description will reflect the tensions and passages between experience, memory, and imagination. How they will interact with the pictures depends among many other things on the way that these pictures materialise, or if they do materialise at all.

The rolls I have sent to you are Kodak 7239, 160 ISO daylight films. This “Video News Film”, as it was marketed, is a relatively coarse and insensitive colour reversal film made for news camera people for quick development and transfer to video. Kodak introduced this emulsion in 1976, so it is likely that much of the news footage we know from the civil war in Lebanon originates from Video News Films. Since the rolls have probably expired decades ago, there is a chance that the films will turn out rather faint or even blank during processing. To me, this seems to be the appropriate canvas for our material relation.

You had sent to me what was originally a letter to and a commission for N. She finally wasn’t able to take the latter, I couldn’t possibly reply to the former, which you forwarded to me as it was, so here’s an attempt to connect my text to yours.

Since after N comes O, I took the commission together with J, who acted as a producer, driver and aperture consultant, and occasionally accompanied by N – the other, smaller N. We shot on 6 days distributed over a 10-day span, not counting some prior scouting. From the first shot on the first shooting day, I decided to go for a handheld camera, mainly for rapidity and discretion given the circumstances.

Your instructions weren’t only instructive, my descriptions won’t be only descriptive. 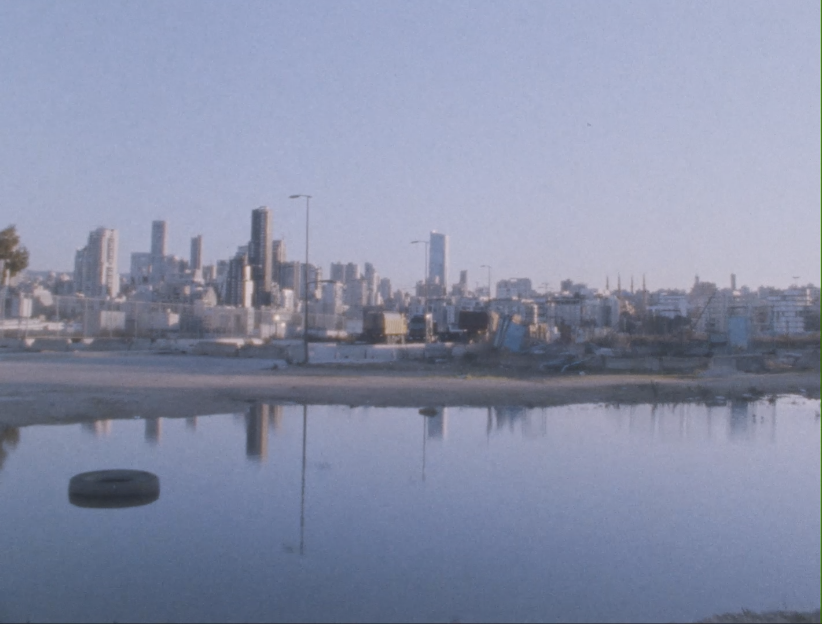 A Material Relation can only be viewed on devices with a screen resolution wider than 840 pixels.